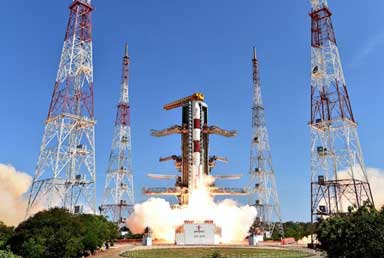 TORONTO – 22 June 2016 – GHGSat-D (also known as “CLAIRE”) ascended to space last night at 03:56 UTC on board PSLV-C34 along with 19 other satellites (see Figure 1). Separation from its XPOD Duo dispenser occurred in sequence after other satellites, roughly 19 minutes after liftoff as confirmed by on-board telemetry. The first pass over SFL’s ground station in Toronto was approximately 10.5 hours later and the satellite was found to be generating lots of power and at a comfortable temperature. “We are pleased and excited over the successful launch and first contact with GHGSat-D,” says Robert Zee, Director, SFL, “This is the beginning of what will be an important mission of demonstrating targeted greenhouse gas monitoring so that organizations around the world will have accurate feedback on compliance to environmental requirements. GHGSat Inc. will be providing an important service that contributes to the global fight against climate change.” 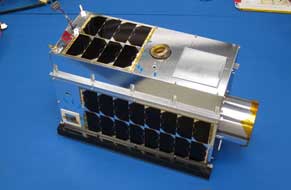 GHGSat-D is a 15-kilogram, 20x30x40cm satellite based on SFL’s Next-generation Earth Monitoring and Observation (NEMO) platform (Figure 2). The satellite used SFL’s XPOD Duo dispenser system, one of the largest XPOD dispensers designed and built by SFL for small microsatellites. The main instrument on board GHGSat-D is an advanced miniature hyperspectral SWIR imaging spectrometer provided by MPB Communications Inc. The instrument will measure greenhouse gas emissions at targeted sites such as fugitive sources (tailings ponds and landfills) and stacks (flaring and venting). A secondary instrument will measure clouds and aerosols in order to enhance retrievals from the primary instrument. The satellite is a precursor to a commercial constellation of identical satellites that will form the basis for GHGSat Inc.’s global monitoring service.

“After just one contact with GHGSat-D, SFL is already 25% through its planned commissioning tasks,” says Zee, “We look forward to completing commissioning swiftly. SFL has, over the years, refined its satellite and ground station technology to enable responsive commissioning and short lead-times to operational status. Just as commercial buildings must be constructed on short schedules as every day of being open-for-business counts, so too must our satellites satisfy demanding commercial requirements. Satellites need to be open for business as soon as possible as well.”

The NEMO platform used by GHGSat-D is also the basis of future missions, including the HawkEye360 Pathfinder mission under development by SFL and Deep Space Industries. NORSAT-1, NORSAT-2, and NEMO-AM all harness the performance of this highly capable yet compact platform. The successful launch and contact of GHGSat-D is testimony to the pioneering and impactful advances in small satellite technology at SFL.