TORONTO – 26 September 2016 – CanX-7, a 3.5kg, 10x10x34cm nanosatellite, was successfully launched on PSLV-C35 from India this morning. The satellite was contacted and found healthy during its first pass over Toronto several hours later. CanX-7 carries an Automatic Dependent Surveillance – Broadcast (ADS-B) receiver to detect and track aircraft from low Earth orbit. The ADS-B receiver was built by the Royal Military College of Canada, and adapted for integration with CanX-7 by SFL. SFL has built and launched several ship tracking missions for various customers around the world, and the success of CanX-7 will enable SFL to expand its offerings to aircraft tracking applications.

The satellite also houses four square meters of deployable drag sail in four modules that will demonstrate accelerated deorbiting. The sails accelerate the orbital decay rate of the satellite by using atmospheric drag. The ballistic coefficient of the satellite is reduced by increasing drag area which results in earlier re-entry. “This is a milestone for Canada, in launching deployable drag sail technology developed at home,” says Robert Zee, Director, SFL, “Obtaining space heritage for these drag sails will open the door to including them on future nanosatellite and microsatellite missions to comply with IADC debris mitigation guidelines. Without such technology, higher altitude satellites may not return to Earth for hundreds of years.” 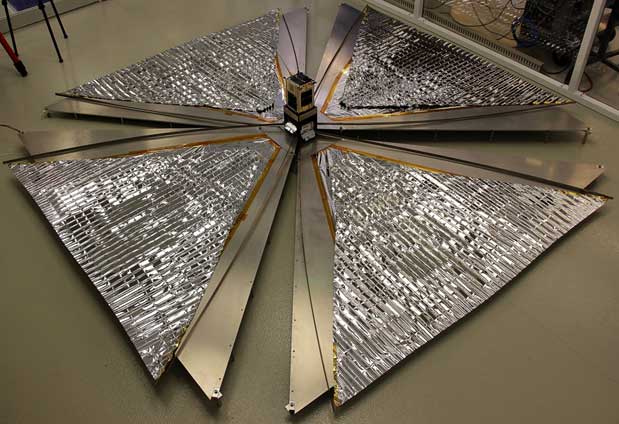 The Inter-Agency Space Debris Coordination Committee (IADC), comprised of members from international space agencies, published guidelines in 2007 on what measures were needed to mitigate a growing orbital debris problem. Canada, among other space-faring nations, has effectively been enforcing the IADC’s recommended 25-year end-of-life deorbiting requirement for satellites in low Earth orbit. “The availability of SFL’s drag sail technology for future missions will ensure that those missions will proceed unfettered by regulatory requirements, and will act responsibly in the global effort to declutter Earth orbit,” says Zee.

Commissioning of CanX-7 will continue into October. Following this, the ADS-B aircraft tracking receiver will be tested over a six-month period. Upon completion of the ADS-B demonstration, CanX-7’s four drag sails will be deployed one at a time, while being monitored by on-board cameras. The deorbiting progress will then be observed over the course of several years.