On Tuesday, Feb 25 it will have been a year since the launch of the Austrian BRITE and they are now well on the way to an exciting and fruitful lifetime of studying the skies.

The satellites have continued to observe the Orion constellation. Starting in December 2013 BRITE-Austria joined UniBRITE on the campaign providing our first two-colour photometric data.  Conveniently, in late 2013, MOST was also observing Eta-Orionis (a quadruple system with an eclipsing binary).  For a time, all three spacecraft were performing simultaneous observations.  A minimally post-processed sample of UniBRITE data from this system is shown below indicating the regularity and quality of the data being received (data provided courtesy of Rainer Kuschnig, University of Vienna).

Throughout the course of the Orion campaign steady improvements have been made to increase uptime and efficiency. As a result of those efforts, the satellites are observing each and every orbit with high reliability (SFL expects this to be >95% in 2014).  Time coverage has been expanded from 15 minutes/orbit (the mission requirement) to up to 30 minutes/orbit.

As the science team processes the data received from the satellites, and though the processing is still underway, initial independent approaches all seem to be saying the same thing: that the BRITE data is very good and that the promise of two-colour milli-magnitude precision photometry will be realized.

In the meantime, the stars march on and Orion is now heading out of view. Preparations for the next set of primary and secondary targets have already begun. Simultaneous ground based observations are also in the works. And with three more BRITE satellites launching this year, 2014 is shaping up to be a very exciting one for BRITE-Constellation. 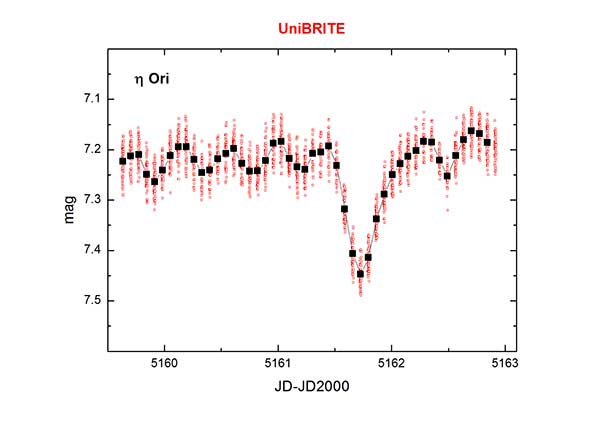