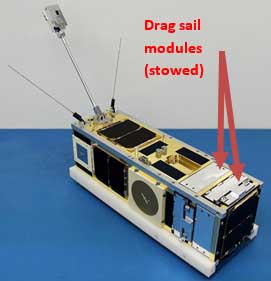 TORONTO – 3 May 2017 – After collecting over 4.3 million Automatic Dependent Surveillance – Broadcast (ADS-B) messages from aircraft since it launched in September 2016, the 3.5 kilogram 10x10x34cm CanX-7 nanosatellite (Figure 1) deployed its four (4) drag sails this evening. Each sail has an area of approximately one square meter. The sails (Figure 2) are intended to decrease the ballistic coefficient of the satellite and use atmospheric drag to accelerate orbital decay. The drag sail technology is important for nano- and microsatellites whose low Earth orbital presence would exceed the Inter-Agency Space Debris Coordination Committee (IADC) guidelines that limit such presence to 25 years after end of mission. “With SFL’s innovative drag sail technology verified on orbit, the door is opened to using this technology on future missions where compliance to IADC guidelines would not otherwise be possible,” says Robert Zee, Director of SFL, “Such compliance is essential to ensuring that space debris is mitigated for the world. It is also a critical component in satisfying regulatory bodies so that small satellite missions may proceed uninhibited.” 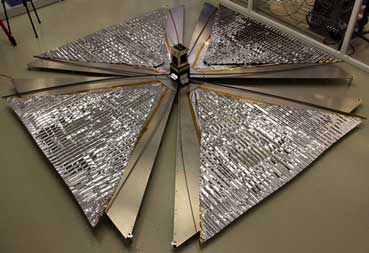 CanX-7 completed a seven (7) month campaign to collect ADS-B messages from aircraft to demonstrate Canada’s first ADS-B data collection from space. With that phase of the mission successfully completed, the drag sails were deployed to begin the second phase of the mission. The sequential phases were intended to emulate an operational mission followed by deorbiting. A key component in the drag sail technology demonstration was long-term stowage of the drag sail modules in space without interrupting or affecting the operational mission. “We want our drag sail technology to be compact and non-intrusive to a satellite’s main mission. This will ensure wide acceptance and easy adoption by future microsatellite missions,” says Zee.

“The four drag sails were deployed across the two passes this evening (two sails per pass),” reports Brad Cotten, CanX-7 Project Manager. “All telemetry is nominal and indicates that each sail is fully deployed. The deployment was also confirmed optically from the ground.” During this final phase of the CanX-7 mission, the deorbiting process will be closely monitored via the SFL ground station in Toronto. Orbital decay rate will be determined and compared against pre-launch simulation results. “We are thankful to our sponsors that helped make this mission successful for the benefit of Canada and the world, including Defence R&D Canada – Ottawa, the Natural Sciences and Engineering Council of Canada, COM DEV, Royal Military College of Canada, and the Canadian Space Agency.”