After Only One Week, CanX-7 Shows Drag Sails are Effective at Deorbiting Satellite

TORONTO – 11 May 2017 – After deploying its drag sails only a week ago, early results from CanX-7 indicate that the sails are having a noticeable effect.  Figure 1 shows that the altitude decay rate changed significantly following the deployment in the late evening of 4 May 2017 (Toronto time).  The figure also shows that the aerodynamic drag on the satellite has increased as a result of a changed ballistic coefficient.  After a certain amount of time, it is expected that CanX-7 will aerodynamically stabilize due to the so-called “shuttlecock” effect, with all four sails to the rear of the satellite as it travels around Earth.  “This is an earlier than expected positive result from CanX-7,” explains Dr. Robert Zee, Director, SFL, “It confirms and validates the effectiveness of the drag sails in accelerating orbital decay.”  The CanX-7 deorbiting demonstration is intended to space qualify SFL-developed drag sail technology.  The technology can then be used with confidence to ensure that small satellites comply with Inter-Agency Space Debris Coordination Committee (IADC) guidelines for space debris mitigation.  It is an important technology for ensuring that the environment is kept safe for future generations of low Earth orbit missions. 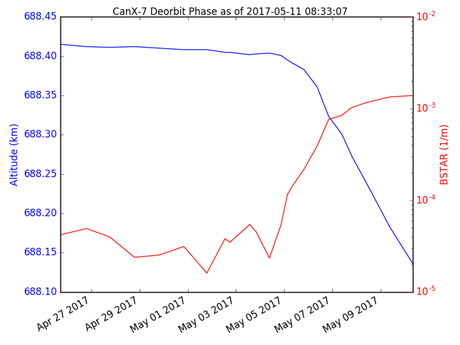 Figure 1: CanX-7’s early deorbiting progress. In blue, CanX-7’s altitude, covering the period immediately before drag sail deployment and one week after. In red, the BSTAR component of the two-line elements from NORAD showing increased drag on the satellite.

CanX-7 is a 3.5kg nanosatellite built by SFL and funded by Defence R&D Canada (Ottawa), the Natural Sciences and Engineering Research Council, COM DEV Ltd., and the Canadian Space Agency.  The satellite was launched in September 2016. Its two-fold mission is to demonstrate Automatic Dependent Surveillance – Broadcast (ADS-B) message collection from space for global aircraft situational awareness, and to demonstrate deorbiting technology developed by SFL to ensure that small satellites can continue to launch and be successful for generations to come.