CLARA on NorSat-1 Successfully Switched on for the First Time

The Compact Lightweight Absolute Radiometer (CLARA) will monitor the Sun’s energy input to the Earth in the coming years through measurement of the Total Solar Irradiance (TSI).

The CLARA commissioning team, consisting of an engineer and a scientist from PMOD/WRC and an engineer from UITAS/SFL, successfully performed commissioning measurements from 21 – 24 August
2017 with the CLARA radiometer from the ground control center in Oslo, Norway. All planned measurements were successfully conducted, and one of CLARA’s three channels was fully
commissioned. The TSI value from these “First-Light” measurements is 1360.9 ±0.4 W m-2, which is very close to the predicted value. This is a satisfying verification of the robustness of the new CLARA design. Commissioning experiments, which are now finished, included measurement of the deep space background radiation, determination of the pointing sensitivity, adjustment of the so-called CLARA shutter-delay parameter, and of course “First-Light” solar irradiance measurements. All data acquired during the commissioning phase will now be carefully analyzed by PMOD/WRC scientists while CLARA is switched off before routine measurements start in the next weeks.

CLARA is a payload onboard the Norwegian NorSat-1 nano-satellite and is a new generation of radiometer to measure the total solar irradiance which is the energy input from the Sun to the Earth. Solar irradiance measurements in space have been conducted since 1979 by various institutes, and have an average value of about 1361 W m-2. The main science goal of CLARA is to measure TSI with an uncertainty better than 0.4 W m-2 on an absolute irradiance level and a relative stability of 5 mW m-2 yr-1 (0.0004% of the TSI per year). Along with its forerunners, VIRGO and PREMOS, CLARA (www.pmodwrc.ch/pmod.php?topic=clara) continues the long-term involvement of the PMOD/WRC in solar research.

It is controversially discussed in the science community whether solar irradiance has a long-term trend and whether climate variations within the past 10,000 years are related to changes in solar irradiance (Schmutz, 2016). Nevertheless, the influence of the sun is viewed as a major candidate and this is why the WMO lists TSI as an essential climate variable. In view of the unknown role of suspected (and predicted) variability in solar irradiance on the terrestrial climate, it is therefore essential that monitoring of solar irradiance continues on an accuracy level that is capable of capturing any variations that could have a significant impact on the terrestrial climate. CLARA’s performance will be sufficient to measure any climate-significant variation.

The CLARA experiment sets new standards for solar irradiance radiometers in terms of a reduction in weight and size, without compromising accuracy and stability (Finsterle et al., 2014). The radiometer is fully characterized on the component level as well as being calibrated end-to-end at the TSI Radiometer Facility (Walter et al., 2016). The measuring cadence of 30 s, currently the highest cadence of an absolute radiometer in space, will allow the study of solar irradiance variations at its high frequency end to be extended.

One engineering and two CLARA flight units were built by the PMOD/WRC. The institute was responsible for the mechanical and thermal design of the hardware, development of the electronics, and in-house manufacture. Swiss industry supported the project by: developing software, manufacturing several hardware components, running mechanical and thermal simulations, and conducting environmental testing. CLARA was assembled at PMOD/WRC and calibrated at the Laboratory for Atmospheric and Space Physics (LASP) in Boulder Colorado, USA.

The Norwegian Space Center selected the NorSat-1 mission as an affordable approach to science in space, as part of the National Space Program. Norsat-1 was launched on 14 July 2017 on a Soyuz rocket from the Baikonur Space Center in Kasachstan. The satellite will investigate solar radiation, space weather, and detect ship traffic with an AIS transponder. The science payload will cover two aspects of scientific research focusing on the sun, including measuring solar irradiance with the CLARA radiometer (PMOD/WRC), and measuring electron plasma around the Earth with Langmuir probes (University of Oslo, Norway). The satellite platform has dimensions of 23 x 33 x 44 cm and was built by the University of Toronto Institute for Aerospace Studies Space Flight Lab, Canada. Norway kindly provided payload space aboard NorSat-1 to Switzerland. 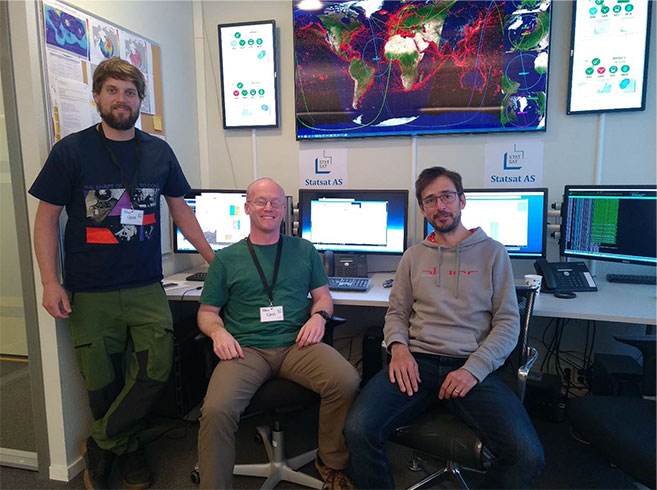