This article courtesy of Satnews

Robert Magner won first place and a $10,000 check for his paper entitled, “Extending Target Tracking Capabilities through Trajectory and Momentum Setpoint Optimization.” Placing second and splitting a $7,500 prize were Nathan Cole and Starla Talbot for their co-authored paper, “Guidance, Navigation, and Control for Commercial and Scientific Applications of Formation Flying.”

Established as a self-sustaining specialty lab at UTIAS in 1998, SFL develops complete smallsat missions for public and private sector clients worldwide. Each year, SFL sends its graduate students (engineers in training) to participate in the Small Satellite Conference. Some enter the Student Competition on occasion. Over the past 20 years, SFL has developed 22 nano- and micro-satellites. Another 11 satellites are currently being built at the Toronto facility. 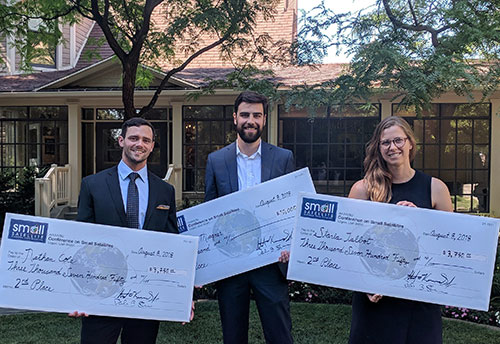 The winners from SFL… and their checks for work well done! From left to right: Nathan Cole, Robert Magner, Starla Talbot

More than 100 graduate students have been trained through microspace satellite missions at SFL over the past two decades. In this sense, SFL’s professionally delivered satellites combined with a hands-on training program are akin to the medical industry’s “teaching hospitals.”

In his wining paper, Robert Magner described a new software technology that enhances the ability of small Earth Observation (EO) satellites to track fixed targets on the ground with a high degree of availability, either for remote sensing or communications applications, using an on-board star tracker.

Nathan Cole and Starla Talbot presented a guidance, navigation and control system that adapts SFL’s formation flight capabilities to multiple smaller satellites in an upcoming commercial mission. This research built on technology developed by SFL for the 2014 CanX-4 and CanX-5 mission in which two nanosatellites successfully achieved precise and autonomous formation flight.

“Congratulations to Robert, Nathan, and Starla for this impressive accomplishment in the small satellite industry,” said SFL Director Dr. Robert E. Zee. “Each year the world’s best young satellite engineers arrive in Utah to compete in this competition, and SFL students came out on top. The advances made by our students will enhance SFL microspace missions for the foreseeable future. The first and second place wins at the Small Satellite Conference Student Competition are a nice acknowledgment of the outstanding work of our students and the unsurpassed mentorship of the highly skilled SFL staff.