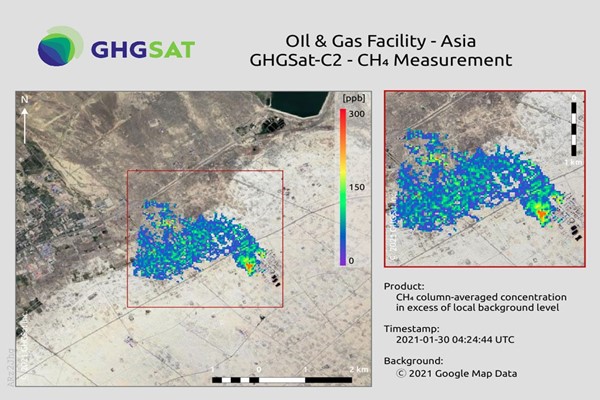 GHGSat Inc. reported that the GHGSat-C2 microsatellite, also known as “Hugo”, captured its first image of a methane plume less than a week after launch on January 24, 2021, on the SpaceX rideshare mission. Hugo was just one of 12 satellites on that mission developed by SFL.

According to the announcement, Hugo detected the methane plume over an oil and gas facility in Asia (See image). The next day, GHGSat-C1 or “Iris”, also built by SFL, confirmed the methane measurement from the same location. This verified the data collected by Hugo matched that of Iris, which carries a gas-detecting sensor of the same design and has been operational since last fall.

“The speed of this first methane observation is exceptional and we’re very proud to have Hugo detecting emissions within its first week in orbit,” said Stephane Germain, GHGSat Inc. CEO.

Hugo’s first data capture is impressive for its speed and precision. GHGSat Inc. reports the sensors aboard Hugo and Iris can detect emissions sources that are extremely small and do so with a precision about 100 times higher than other greenhouse gas monitoring satellites in orbit.

GHGSat Inc. awarded SFL the development contract for Iris and Hugo after SFL built and launched the pathfinding GHGSat-D (“Claire”) atmospheric monitoring microsatellite in 2016. Successful detection of ground-based methane emissions from space is due in part to the precise attitude control and target tracking capability of the SFL NEMO bus.

In November 2020, SFL was awarded a contract by GHGSat to build an additional three microsatellites for its commercial greenhouse gas monitoring constellation. Development of these satellites is now underway at SFL’s Toronto facility.