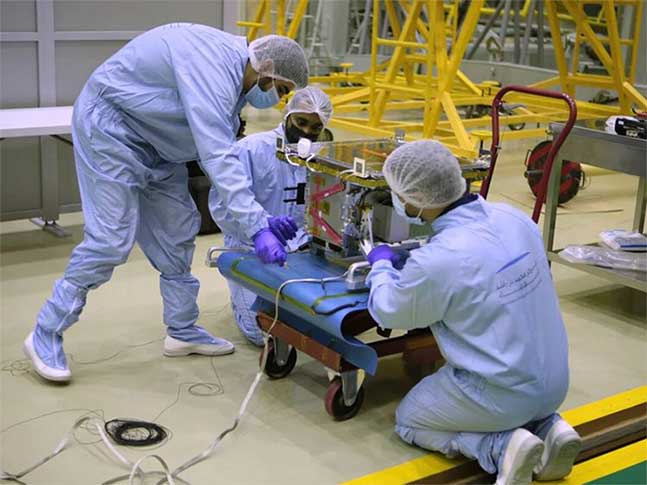 “We congratulate Dubai on the launch of its first atmospheric monitoring microsatellite,” said SFL Director, Dr. Robert E. Zee. “DMSat-1 will play a key role in monitoring atmospheric aerosols and greenhouse gases for Dubai and the UAE.”

SFL was selected to build DMSat-1 for its compact size and performance, including the mission-critical importance of attitude control and precise sensor pointing. SFL has developed high-performance ground target tracking capabilities that enable the small satellite to execute a slewing maneuver in orbit to accurately point its sensors at selected swaths of the atmosphere.

“Our ability to keep low-inertia, relatively inexpensive microsatellites like DMSat-1 pointed accurately and stably in orbit has made atmospheric monitoring missions possible at much lower costs,” said Zee.

DMSat-1 carries two instruments onboard. The primary payload is a multispectral polarimeter that monitors aerosols, which are typically fine particles of liquids and solids in the upper atmosphere often caused by anthropomorphic sources. Aerosols also correlate to natural phenomenon such as dust storms. The secondary payload is a pair of spectrometers for detection of greenhouse gases, such as carbon dioxide and methane.

In its 23-year history, SFL has developed CubeSats, nanosatellites, and microsatellites that have achieved more than 140 cumulative years of operation in orbit. These microspace missions have included SFL’s trusted attitude control and, in some cases, formation-flying capabilities. Other core SFL-developed components include modular (scalable) power systems, onboard radios, flight computers, and control software.