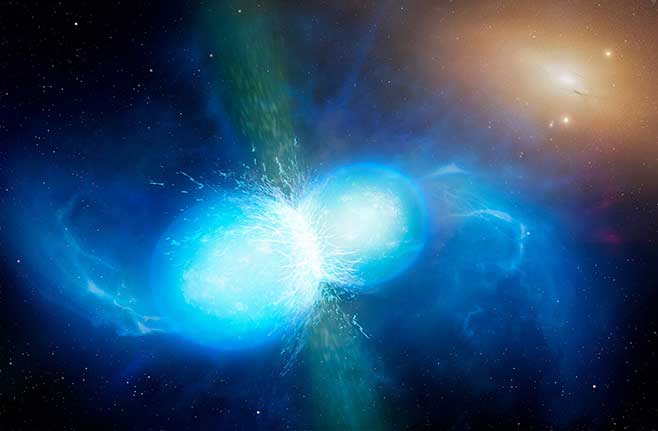 Artistic rendering of a neutron star merger from Wikipedia. (By University of Warwick/Mark Garlick, CC BY 4.0, https://commons.wikimedia.org/w/index.php?curid=63436916 )

“SFL is pleased that NASA has chosen us to participate in the Pioneers Program that was created specifically to perform astrophysics science with smaller, more cost-effective hardware, including small spacecraft developed the microspace way,” said SFL Director Dr. Robert E. Zee.

Managed by the NASA Marshall Space Flight Center, StarBurst will focus on neutron star research, using a 250 kg smallsat built by SFL to observe the gamma rays emitted from these merger events, which form most of the heavy metals, such as gold and platinum, in the universe. It is believed StarBurst could observe up to 10 neutron star mergers every year.

SFL will develop the StarBurst mission on its space-proven 1x1x1-meter scalable DAUNTLESS bus. Under Phase A of the program, SFL will complete the platform concept design, and upon approval by NASA, will then proceed with detailed design, integration, and testing of the spacecraft. SFL will also support the launch, commissioning, and operation of StarBurst, notionally scheduled for 2025.

In its 23-year history, SFL has developed CubeSats, nanosatellites, and microsatellites that have achieved more than 150 cumulative years of operation in orbit. These microspace missions have included SFL’s trusted attitude control and, in some cases, formation-flying capabilities. Other core SFL-developed components include modular (scalable) power systems, onboard radios, flight computers, and control software.