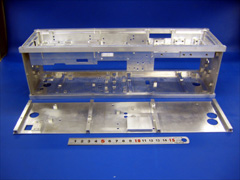 The aluminum 6061-T6 structure consists of six structural solar panels and a tray, to which most large internal components and payloads are mounted. Once fully integrated, the structure will support a spacecraft which weighs approximately 3.5 kg. The structure form-factor is essentially a rectangular prism of dimensions 10 x 10 x 34 cm.

Due to the harsh environment of space the spacecraft can experience extreme temperatures due to extreme sunlight and shade. With the use of mainly passive thermal control measures and prudent material selection, the incident fluxes are limited to ensure a suitable operating temperature range. 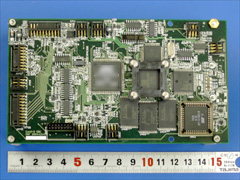 The CanX 2 on-board computers (main and payload) were developed at SFL and each uses an ARM7 processor running at 15 MHz with 2 MB of SRAM equipped with triple-voting error detection and correction (EDAC), 6 MB without EDAC protection, for running spacecraft software. Each computer also contains 16 MB of Flash for storage of telemetry, science data, images and pre-positioned code. 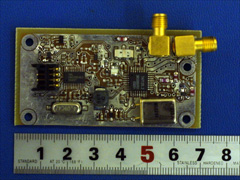 The nominal communication system flown on CanX-2 is a full-duplex system which uses a UHF transceiver operating in an amateur frequency for the uplink and a S-Band transmitter for the downlink. This SFL developed communication system is capable of operating between 32 to 256 kbps during downlink and 4 kbps during uplink. The UHF antenna arrangement is a quad-canted monopole configuration that is deployed (passively) upon ejection from the X-POD and provides near omni-directional coverage.

Attitude determination with an accuracy of ±1º is achieved using a suite of SFL-developed sun sensors, supplemented by a SFL-developed three-axis magnetometer deployed approximately 20 cm from the satellite on the end of a boom. Three-axis attitude control is achieved on CanX 2 using a momentum bias system with three orthogonal vacuum-core magnetic torquer coils and a reaction wheel. The wheel, jointly developed by Sinclair Interplanetary and UTIAS/SFL, generates a maximum torque of 0.3 mN·m and has a maximum momentum storage of 10 mN·m·s and will be flight tested for the first time on CanX-2. The attitude control system will achieve a pointing accuracy of ±10º and maintain a pointing stability of ±1º. Additional verification of the ADCS will be made through images taken of the Earth, the Moon, and the stars by the on-board CMOS imagers. 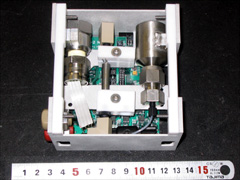 The nanosatellite propulsion system (NANOPS) is a liquid-fuelled cold gas system using sulfur hexafluoride (SF6) as a propellant. The nozzle is oriented such that thrusting induces a major-axis spin on CanX 2. Through a series of experiments, several performance characteristics of NANOPS will be inferred from this motion combined with pressure, flow, and temperature readings. The satellite angular rates achieved by NANOPS will be measured using the on-board attitude determination subsystem.