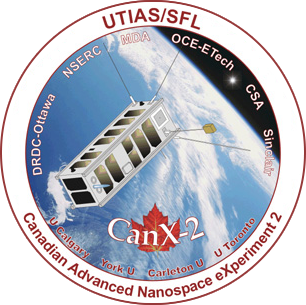 The image of the Earth in the background is a picture of the Jet Stream over Canada, taken by the Space Shuttle, and it symbolizes the two atmospheric experiments that we have on board. The star above Earth’s limb is Polaris, the North Star, representing the Great White North and symbolizing the guidance and navigation abilities provided by the advanced attitude determination and control system on CanX-2. The propulsion capability, never attempted before on a satellite of this size, is indicated with the thrust plume drawn at the lower left of the satellite.