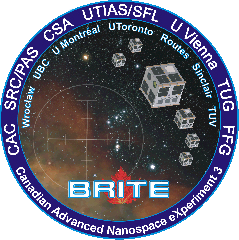 CanX-3, also known as BRIght Target Explorer (BRITE), is a nanosatellite constellation planned to make photometric observations of some of the brightest starts in the sky in order to measure their variability. The satellites are being developed by UTIAS/SFL, die Technische Universität Graz (the Technical University of Graz) and die Technische Universität Wien (Vienna University of Technology) with Sinclair Interplanetary, Routes AstroEngineering, and Ceravolo Optical Systems as subcontractors.

The mission patch background is the Orion constellation, being one of several parts of the sky of interest to BRITE. Orion, the Hunter, was chosen to symbolize the hunt for stellar information. The Orion Nebula has been overlaid in the lower left, to symbolize the dispersion of heavy elements that result from the evolution of massive, luminous stars. The crosshairs symbolize targeting. Multiple stars in the Orion belt appear in the field of view, alluding to the differential nature of photometry.

The maple leaf under “BRITE” credits Canada with the original concept for the mission, specifically Prof. Slavek Rucinski at University of Toronto.