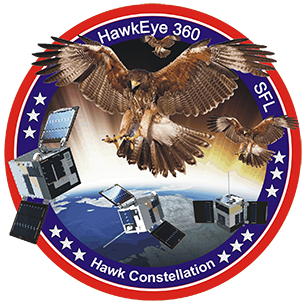 SFL was selected for this mission based on the success of the Pathfinder mission and the importance of tight formation flying by multiple satellites for successful RF signal geolocation and analysis. SFL offers compact, low-cost formation flying technology at a maturity and cost unmatched by any other small satellite developer. Precise formation control was initially demonstrated on-orbit by SFL in the highly successful CanX-4/CanX-5 mission (2014). The main innovation of CanX-4 and CanX-5 was to bring the cost of precise formation flying within the reach of commercial business models.

Relative position knowledge of each satellite in the constellation is critical to the HawkEye 360 RF system because it relies on triangulation of radio signals from Earth by at least three satellites to accurately geolocate transmission sources. For the triangulation to be calculated correctly, each satellite must be located with sufficient precision in space and relative to one another.
SFL has incorporated several technologies that make on-orbit formation flying possible for commercial missions:

The HawkEye 360 space-based RF sensing technology and proprietary analytics enable a variety of commercial applications for government and corporate customers that are not possible with terrestrial detection methods. Primary applications are in the communications, transportation and data analysis markets.

The ability to locate and characterize RF signals across many bands from space, for example, will allow regulators, telecommunications companies and broadcasters to monitor wireless usage to identify areas of interference. In the field of transportation, RF signals transmitted from the air, ground or sea can be monitored. The system can also be used to expedite search and rescue operations by quickly pinpointing activated emergency beacons.