About SFL: History and Highlights 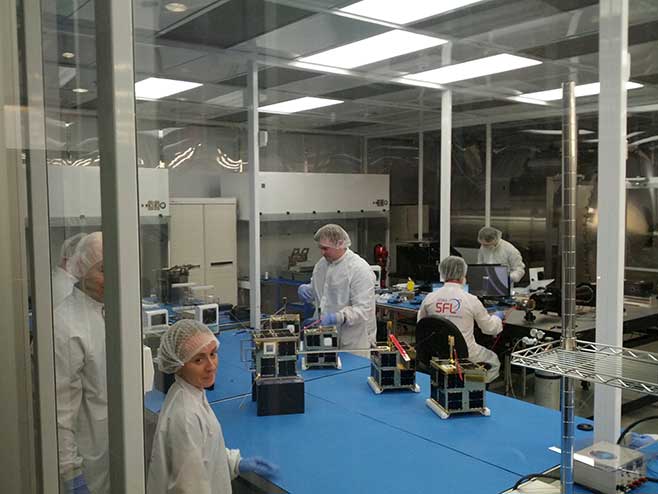 The Space Flight Laboratory (SFL) at the University of Toronto Institute for Aerospace Studies (UTIAS) was founded in 1998 and is Canada’s premier microspace organization. SFL builds low-cost microsatellites and nanosatellites that continually push the performance envelope. Missions are typically developed with stringent attitude control and data requirements that are striking relative to the budget available. SFL must be innovative while adopting a highly focused approach to development in order to achieve costs at a small fraction of the price of similar satellites developed elsewhere. SFL has developed the Generic Nanosatellite Bus (GNB) and the Nanosatellite for Earth Monitoring and Observation (NEMO) bus to provide low cost, high performance missions to international customers. SFL arranges launches through its Nanosatellite Launch Service (NLS) and provides customizable separation systems called “XPODs” for those launches. As part of its complete end-to-end mission capabilities, SFL maintains a mission control center consisting of multiple ground stations.

SFL operates multiple satellites from its mission control center, including MOST, CanX-2, NTS and the BRITE satellites. Each satellite represents an advance in the field and has broken barriers relative to what small satellites can do. The 53-kilogram MOST satellite, Canada’s first space telescope, was launched in June 2003 and has been operating successfully for many years despite having been designed for a one-year mission. The MOST space astronomy satellite has made an overwhelming impact through scientific discoveries related to solar-type stars and exoplanets. CanX-2, launched in April 2008, is Canada’s smallest operational satellite – roughly the size of a milk carton. Its technologies push the state of the art in low-power, miniature satellite components. It is also among the smallest scientific satellites in the world to first feature three-axis attitude stabilization. Nanosatellite Tracking of Ships (NTS), a 6.5-kilogram satellite, was launched together with CanX-2 in April 2008 to demonstrate leading edge ship detection technology from space. NTS was developed on an incredibly fast timeline of only six (6) months, a first for a satellite of this class in Canada and perhaps the world.

SFL launched a second ship detection satellite, AISSat-1, in July 2010 for the government of Norway. AISSat-1 is operating successfully in orbit and has proven the capabilities of the Generic Nanosatellite Bus (GNB). AISSat-2 and AISSat-3 have also been developed by SFL as followers to this highly successful mission. Other SFL missions include BRITE Constellation, a collection of six space astronomy nanosatellites for three countries, Austria, Poland and Canada, each satellite with better than 1 arcminute pointing accuracy. The first three BRITE satellites, UniBRITE, BRITE-Austria, and BRITE-PL1 were successfully launched in 2013. CanX-4&5 are formation flying nanosatellites developed by SFL to demonstrate precise, autonomous formation flying at low cost. SFL is also the developer of the NEMO Aerosol Monitoring (NEMO-AM) satellite for the Indian Space Research Organization (ISRO), a 15-kilogram microsatellite for aerosol monitoring in three spectral bands. SFL is the developer of the NEMO High Definition (NEMO-HD) mission for SPACE-SI, a Slovenian Center of Excellence. NEMO-HD is 72-kg multispectral imaging and video mission with resolution down to 2.8m. SFL has contributed the attitude control system, command and data handling system, and power system to the Canadian Maritime Monitoring and Messaging Microsatellite (M3MSat). Additional satellite development projects led by SFL include the ship tracking satellite EV9, the greenhouse gas monitoring satellite GHGSat-D, and Norway’s scientific satellite NORSAT-1.

In summary, SFL is recognized internationally for its ultra-low cost, yet high performance missions, and its ability to successfully exploit the latest commercial technologies in space.