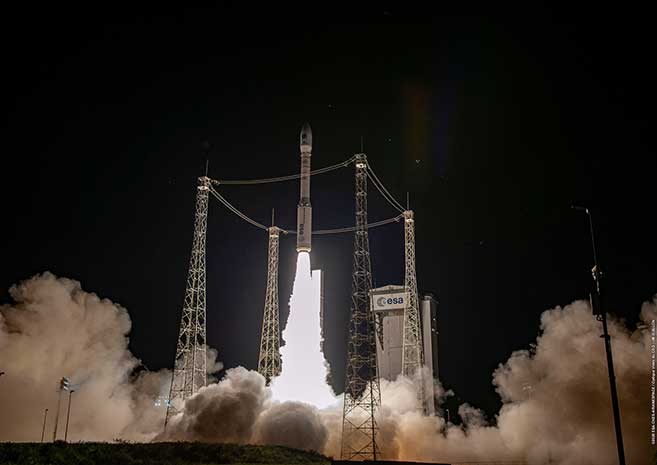 Both satellites were in contact with ground control within hours of their launch on September 2, 2020, aboard an Arianespace Vega rocket from the Guiana Space Center in French Guiana, South America. The satellites are healthy and operating as planned.

Established at the University of Toronto Institute for Aerospace Studies (UTIAS) in 1998, SFL has developed CubeSats, nanosatellites, and microsatellites that have achieved more than 126 cumulative years of operation in orbit. These microspace missions have included SFL’s trusted attitude control and, in some cases, formation-flying capabilities. Other core SFL-developed components include modular (scalable) power systems, onboard radios, flight computers, and control software.

“Our space-proven attitude control and precise pointing technologies were major factors in winning the development contracts for GHGSat-C1 and NEMO-HD,” said Zee.

GHGSat Inc. awarded SFL the development contract for GHGSat-C1 (“Iris”) after building the pathfinding GHGSat-D (“Claire”) microsatellite launched in 2016. Using high-precision target tracking capabilities developed by SFL, Claire successfully demonstrated that sources of methane and other gas emissions could be detected and measured from space. SFL is currently developing another microsatellite, GHGSat-C2, for the company.

“The GHGSat-C1 mission is critical to GHGSat, and we knew we could rely on SFL to deliver our satellite. In addition to the normal challenges of spaceflight, SFL overcame a litany of launch delays beyond their control to make this mission a success. That’s the kind of service that keeps customers coming back to SFL,” said Stephane Germain, President of GHGSat Inc.

Precise pointing made possible by a stable platform at a relatively low cost was also a factor in Slovenia’s selection of SFL to build the NEMO-HD Earth observation microsatellite. It will capture 2.8-meter resolution high-definition multispectral imagery and video for use in a variety of applications. The microsatellite itself is only 60x60x30 centimeters.