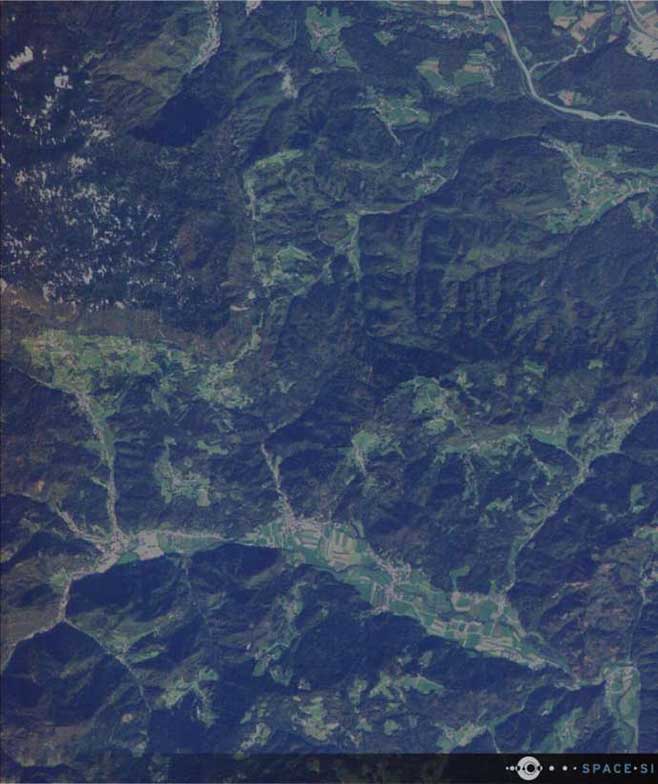 Multispectral image captured over Slovenia during the commissioning phase of NEMO-HD which was launched Sept. 2, 2020.

“SFL congratulates Slovenia on this auspicious first step toward building a robust national space program,” said SFL Director, Dr. Robert E. Zee. “NEMO-HD represents a breakthrough in next-generation, compact microsatellite missions, and pushes the envelope of what can be accomplished by a small microsatellite in Earth observation.”

“NEMO-HD is enabling a new Earth observation concept by combining multispectral and video imaging from space. This can be controlled interactively in real time if needed when NEMO-HD is flying in the range of a ground station,” said Prof. Tomaž Rodič, CEO of SPACE- SI. “With NEMO-HD successfully in orbit, we have achieved a very innovative and cost-effective remote sensing system which combines the agile microsatellite with our transportable ground station system, STREAM, and the advanced EO data processing chain, STORM.”

The Slovenia satellite was built on SFL’s NAUTILUS microsatellite bus, which is an augmentation of SFL’s NEMO bus that has been used for numerous successful microspace missions. With a mass of only 65 kg and dimensions of 60x60x30 centimeters, NEMO-HD captures multispectral (RGB/NIR) images that can be sharpened by a panchromatic channel to 2.8-meter resolution.

The satellite also collects high-definition video at 25 frames per second. The main instrument can be operated in real-time imaging mode, allowing an operator at mission control on the ground to view the video feed as it is captured. If an event or feature of interest is spotted, a command can be sent to the satellite to collect a still image of the area.

Imagery and video data acquired by NEMO-HD will be used to monitor agriculture, forestry, urban development, and marine transport, according to Space-SI. NEMO-HD acquired its first historic multispectral image over Eastern Slovenia on September 18, 2020.

In its 23-year history, SFL has developed CubeSats, nanosatellites, and microsatellites that have achieved more than 135 cumulative years of operation in orbit. These microspace missions have included SFL’s trusted attitude control and, in some cases, formation-flying capabilities. Other core SFL-developed components include modular (scalable) power systems, onboard radios, flight computers, and control software.